The Rage of Narcissus tickets 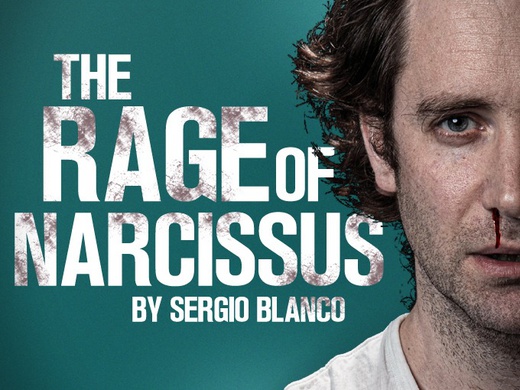 The Rage of Narcissus

When Sergio arrives in Ljubljana to give a lecture on Narcissus, the first thing he does after checking in to his hotel room is to get on an app and look for someone to have sex with. A few hours later, once Igor has come and gone, Sergio spots a dark brown stain on the floor. Looking closer, he sees that it’s a blood stain. And looking around, he discovers more and more blood stains all over the room.

As he begins to investigate, he gets drawn deeper and deeper into a dark murky world of desire, infatuation and murder.

Perfect material for the new play he’s trying to write - if he can get out of Ljubljana alive.

The Rage of Narcissus is a fascinating and disturbing journey into the labyrinth of the self and the darkness within us.

★★★★ "Think Netflix's Making a Murderer or This American Life's Serial. Thebes Land takes aim at the form and shows - bit by bit, drip drip drip - how art gets in the way of the truth. It corrodes and mutates reality. It manipulates and corrupts..." Matt Trueman, What's On Stage

"Thebes Land is an exceptional exploration of performance itself. Exhilarating, moving, and slick, the piece outgrows its theatrical space and defines it. A real highlight of this year’s theatre." Brendan MacDonald, Exeunt

No refunds or exchanges after booking.

The appearance of any member of the cast is subject to change and may be affected by contracts, holiday, illness, or events beyond the producers' control. If in doubt, please check with the Box Office before booking.

His television and film credits include Cobra, The Trial of Christine Keeler, Poldark, The Crown, The Appointment, Poirot, Fearless, Father Brown and Desperate Romantics.

Sergio Blanco is a Franco-Uruguayan playwright and director. His work – which has been translated, published and performed throughout the world – has been awarded the National Playwriting Award of Uruguay, the Playwriting Award of the Municipality of Montevideo, the Prize of the National Fund Theatre, the Florencio Award for Best Playwright, the International Casa de las Americas Prize, An Off West End Award, and The Theatre Award for the Best Text in Greece. His other works include: '45, Slaughter, Opus Sextum, Kassandra, El Salto de Darwin, Tebas Land (Thebes Land), El Bramido de Düsseldorf and his most recent play Cuando pases sobre mi tumba.

Daniel Goldman is an award winning director, translator, playwright and producer. Directing credits include Thebes Land (Off West End Award - Best Production), You're not like the Other Girls Chrissy (co-directed with Omar Elerian - Stage Award and Olivier Award Nomination), Wanawake Wa Heri Wa Windsa (Shakespeare's Globe Theatre and International tour), Oedipus at Colonus (The Cambridge Greek Play), Frankenstein (Inside out Theatre, Beijing) and Songs of Friendship with James Rowland (Three Weeks Editors Award). Daniel has been the artistic director of Tangram Theatre Company since 2006 and he was the artistic director of CASA Latin American Theatre Festival from 2007 until 2019.

You will receive a booking confirmation email.

Please print the booking confirmation and bring it on the day, a minimum of 30 minutes before the performance start time. You will also need to present the card used to purchase the tickets as a valid ID.

Suitable for ages 16 and above