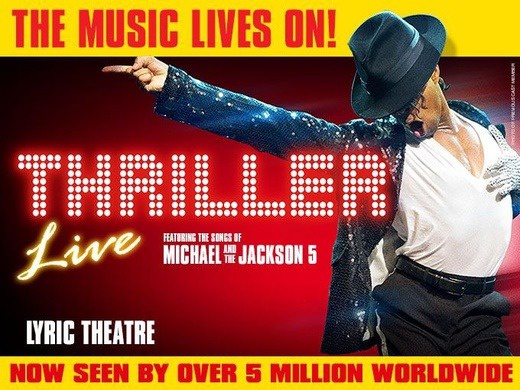 Thriller Live and a Free Meal at Planet Hollywood

Flying Music in association with Adrian Grant are proud to present THRILLER - LIVE, a spectacular, high octane show celebrating the career of the world's greatest ever entertainer - the King of Pop, Michael Jackson, and the Jackson 5.

Established in 2006, THRILLER - LIVE moonwalked into the West End after three acclaimed UK tours and standing ovations across Europe. It is currently playing at the Lyric Theatre, as well as simultaneously touring the UK and Europe with two other first-class productions. To bring to life on stage the sensational dancing and distinctive sound of Jackson's greatest hits, THRILLER - LIVE includes eye-popping multi-media effects and dazzling choreography by the shows award-winning director Gary Lloyd (who has previously worked with artists including Leona Lewis, Will Young, Robbie Williams, and Girls Aloud), plus additional choreography by 5 time MTV award-winning LaVelle Smith Jnr.

THRILLER - LIVE includes over two-hours of non-stop hit songs delivered by an exceptionally talented cast and live band, including the smash hits: I Want You Back, I'll Be There, Show You The Way To Go, Can You Feel It, Rock With You, She's Out Of My Life, Beat It, Billie Jean, Earth Song, Thriller plus many more!

No refunds available after purchase.

A year after he stopped the show with a mid-song standing ovation at the 4,000th performance, award-winning Peter Andre is to guest star in Thriller Live for a strictly limited two-week season in December. Peter joins the cast from 10 – 22 December (except Sunday evenings). Book early to avoid disappointment. Peter Andre will not be performing at the matinee performance on Saturday 14 December

You will receive a confirmation email with your booking reference. If you choose collect at box office please print this and bring it with you on the day of the show a minimum of 30 minutes before the performance start time.

The show is suitable for those aged 5 years +